Glastonbury’s Field Of Avalon have revealed their line-up, today (April 16), coming just days after it was reported that Glastonbury’s dance area, Silver Hayes, revealed their line-up. Leading the names revealed today are female pop group, Bananarama, Frank Turner, and James Morrison. This year’s, five-day festival will be returning, for the first time since 2017 after a traditional fallow year, to Worthy Farm, in Somerset, between the 26th and the 30th of June 2019.

It’s here! We’re so happy to bring you the 2019 lineup for the Field of Avalon… pic.twitter.com/9LUY2XqNOG

The announcement comes after Stormzy, The Cure, The Killers and Janet Jackson were among the huge names on the first major announcement of this year’s line-up. This week also saw the likes of Buzzard Buzzard Buzzard, Steel Banglez, Lady Leshurr, Ocean Wisdom, Four Tet, Miraa May, Ray BLK and many more confirmed to be performing at this year’s vast Silver Hayes bill.

Now Field Of Avalon, have announced their electric bill, for their area at Glastonbury, this June, which sees the likes of Bananarama, Beans On Toast, Cut, Capers, Elephant Sessions, Frank Turner & The Sleeping Souls, Hobo Jones & The Junkyard Dogs, and Ibibio Sound Machine. The popular area, is returning after a two year break, to the Avalon Stage, which takes the form of a huge blue tent, and the Avalon Café, which plays host to smaller acts.

The following acts are also on the bill and will be joining the already stellar line-up is Jade Bird, James Morrison, Lucy Spraggan, Morchhba, My Baby, Nahko and Medicine For The People, Reef, Skinny Lister, Steeleye Span, Tankus the Henge, The Bar-Steward Sons Of Val Doonican, The Blue Areoplanes, The Burning Hell, The Cat Empire, The Dead South, The Magic Numbers, The Shires, and Yola. 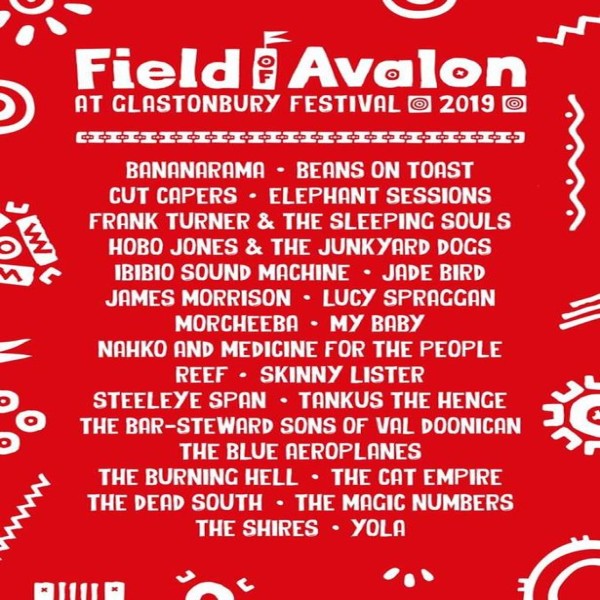 Speaking about the line-up for Glastonbury’s Field Of Avalon area, festival organisers, said: “After our two year break we are delighted to announce our Main Stage line-up for this year’s festival in the Field of Avalon. We are hugely grateful to all those great performers who have agreed to play and to be included this year’s programme. Michael (Eavis) will set the ball rocking and rolling in our wonderful Avalon Café stage.

“Days of wonderful music will follow representing the very best in the world of the contemporary roots and folk field. So come and join us – grab an ale in the legendary Avalon Inn, lie back on the grass, and enjoy a world-class act on the main stage. The Iona Community will be back offering a chat and a cup of tea, there are plenty of lovely stalls and, as always, the historic helter-skelter and all the fun of the fairground. And if perchance it rains you will find plenty of shelter in which to carry on with the party. We’ll see you there – can’t wait!”

See you on the farm! https://t.co/WHuIJ3nxG0