The now legendary Silver Hayes area at Glastonbury festival has today revealed it’s line up for 2019. The area consists of 6 different stages “Sonic, Gully-Blues, Pussy Parlure, Wow, BBC Music Introducing and the new (micro venue) No Average Groove” and is set to play host to some best Dance, Drum N Base and Afro beats music the festival has to offer.

The standout bands performing in the arena this year include Steel Banglez, Lady Leshurr, Four Tet and Camelphat. The area started life as simply “The Dance Tent” in 1995, and over the years has grown into a musical behemoth, playing host to some of the festivals most iconic sets, including a Massive Attack takeover, a legendary Amy Winehouse performance and a Daft Punk headline set in 1997.

In a press release the festival described the actions and activities happening on each stage: “Sonic returns this year with a brand new design and the best in both emerging talent and established names. Friday highlights include the first ever Drum n Bass B2B, with Hype and Randall. Plus there’s Wilkinson B2B with Sub Focus. Look out for TQD, My Nu Leng, Holy Goof UK pioneers of Bassline music. On Saturday, it’s a euphoric afternoon with Crazy P, Dan Shake and Artwork. Followed by 3 of the top DJs in Electronic music. Peggy Gou, Camelphat, Denis Sulta. We are excited for Maverick Sabre’s soulful big return on the Sunday. And other UK talents: Ocean Wisdom, Emerald, Ray BLK, Tion Wayne and Hardy Caprio. And don’t miss FKJ’s: show, this will nourish your soul after a long weekend.”

“New micro venue No Average Groove will feature all genres of music and styles. There will be nothing average about this small stage, the new hidden gem of Silver Hayes. So get your dancing shoes on and groove to the tunes from the hottest underground dance music scene”

Gully-Blues arena sees two stages from previous years merge to bring a large range of eclectic global sounds, ranging from Bristolian dance to Cuban Salsa and Carnival. Friday will see 7 bands from Bogota Columbia perform whilst Saturday brings a little slice of Havana to Somerset and Sunday is closed by Dubstep royalty “Mala” 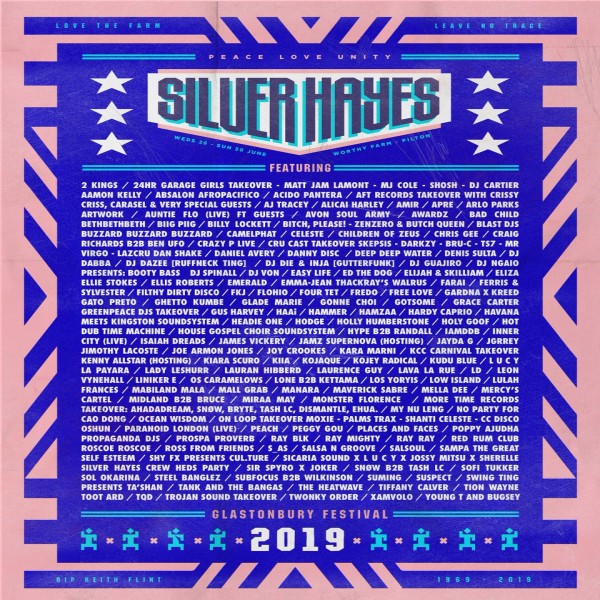 “In the Pussy Parlure this year, Friday we will be bringing you dribbles of the London jazz scene with Emma Jean Thackery, Keys wiz Joe Armon Jones, leading up to more neo soul with Sampa the Great and Eliza and our New Orleans funk headliner the night with Tank and The Bangas. Saturday kicks off with Soulful queens Hamza and Grace Carter, rolling into a Mix of dark electronic sounds from Sofi Tuker & Free Love with the evening ending on a R&B and Hiphop headliner Kara Marni. Sunday we’ve started slow with more R&B neo soul ladies with Joy Crookes and Biig Piig, we then pick up the sound with an energetic set from Auntie Flo, Glasto debut from Irish rapper Kojaque, finishing the night with uplifting voices of House Gospel Choir”

The area also plays host to the BBC introducing stage, where the “headliners of tomorrow” will be performing. Previous artists to come through BBC introducing include previous headliners Florence and The Machine, the rock giants that are Slaves, welsh indie performers Catfish and The Bottlemen and Isle of Wight Festival 2019’s headliner George Ezra.

The line up for the #BBCIntroducing stage at #Glastonbury2019‘s Silver Hayes has just been announced! This is *the* place to find the headliners of tomorrow https://t.co/0f0UqXC9vO@GlastoFestpic.twitter.com/kk6KFcm0CM

Silver Hayes has a line up and history that could rival most festivals around the world, so if you’re lucky enough to have a Glastonbury ticket, make sure you make a visit down there, and you could be part of another legendary summer at Worthy Farm. Just remember your outrageous outfits for “Silver Sunday”