Glastonbury Upgrade Billie Eilish’s Performance because of her Popularity

Billie Eilish has had her slot at this year’s Glastonbury upgraded to handle her massive popularity, confirmed festival organiser Emily Eavis. The singer was set to perform on Glastonbury’s John Peel Stage, which marked one of her first performances since releasing her debut album, ‘When We All Fall Asleep, Where Do We Go?’, last month.

However, after her debut album, ‘When We Fall Asleep, Where Do We Go?’ shot to number one, the singer has had a massive surge in popularity. To cope with this surge in popularity, festival organisers have upgraded the singers slot at the festival. Eilish will now perform on Glastonbury’s Other Stage, where she will play to a larger crowd.

Speaking, to BBC 2’s Jo Whiley, about the decision to upgrade the singers set, festival organiser Email Eavis, said: “We’re currently moving her – she’s on John Peel at the moment but she’s much too big, really, for the slot.  It’s happened so quickly for Billie Eilish. It’s been such an amazing year. It really is going to be her summer.”

We are trying to give her a bigger stage where we can get a larger audience in there. So we are going to move her on to The Other Stage and we are just working out exactly where that’s going to be.”

The news comes after Eilish’s debut took her straight to the top of the chart, which has seen her become the youngest female solo artist to score a number one album, and cementing her in the history books. Her Glastonbury performance will follow her hugely successful debut appearance at Coachella, last weekend, with many hailing the performance as a huge success, including NME – who claimed that the performance was worthy of a future headliner.

She will be joining an eclectic bill – which already boasts headline slots from the likes of Stormzy, The Killers, and The Cure, at the Worthy Farm festival, which runs between the 26th and 30th of June 2019.

The announcement comes as it has been revealed that 42% of the acts confirmed, Glastonbury 2019, are female. This reflects a recent push for festivals to offer a gender-balanced line-up. Australian pop princess Kylie Minogue was previously announced for the prestigious ‘Legends’ slot, on Sunday afternoon, the announcement came after Festival co-ordinator Emily Eavis promised to work towards a 50/50 gender balance across the line-up.

Speaking about working towards gender equality, at the festival, Emily Eavis, said: “The gender balance is something I consider at every stage of the booking process. We’re a little way off being 50/50 across the whole festival, but in 2017 the Park Stage was 50/50 and that will be the case on other stages this year. We’re definitely moving in the right direction.” 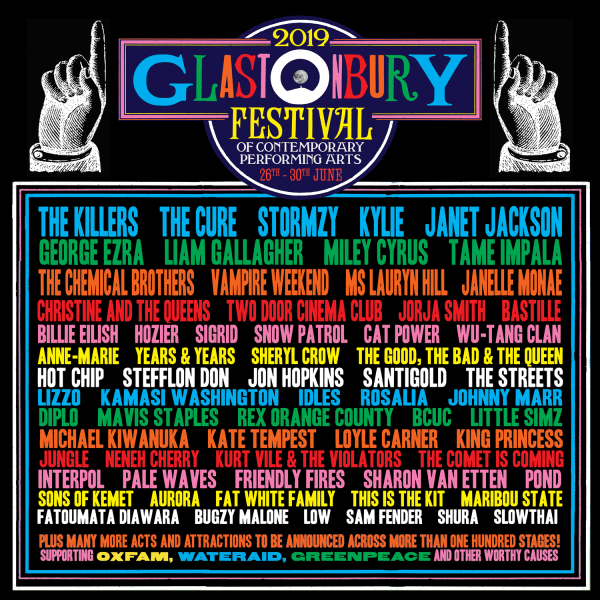