The 19- year-old pop icon Billie Eilish has been announced as the first headliner for next year Glastonbury Festival. She will be the youngest artist that ever headlines the festival.

The singer shared a hint in her Instagram story on Sunday the 3rd October, wearing a hoodie with written words ‘Glastonbury Festival, Worthy Farm‘ and with the caption ‘2022’. See the screenshot of the Instagram story below. 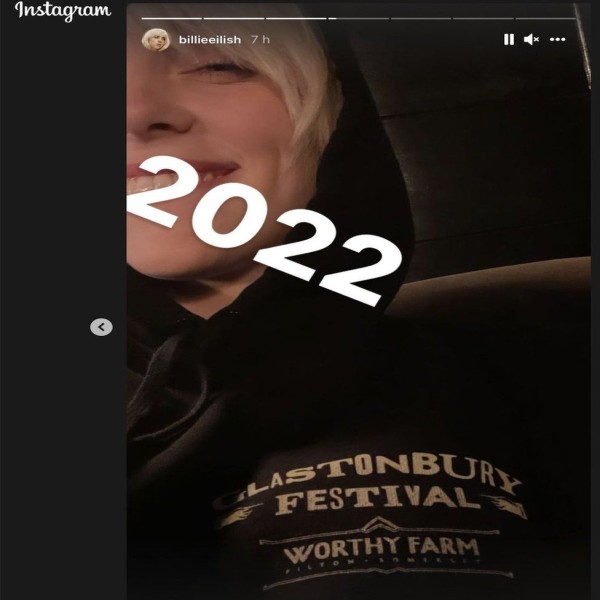 The news had been confirmed by festival organiser Emily Eavis who said: “This feels like the perfect way for us to return and I cannot wait!”. Official Glastonbury page also confirmed the news with the caption: “We are very excited to confirm that @billieeilish will headline the Pyramid Stage on the Friday night at Glastonbury 2022, to become the Festival’s youngest ever solo headliner. This will be her first UK festival headline performance.”

We are very excited to confirm that @billieeilish will headline the Pyramid Stage on the Friday night at Glastonbury 2022, to become the Festival’s youngest ever solo headliner. This will be her first UK festival headline performance. pic.twitter.com/k307gNKyAU

Eilish will be the first female headliner since Taylor Swift in 2016. Swift was booked to perform in 2020 but due to Covid-19, the show had been cancelled, with a virtual event taking place instead.

The online event called ‘The Glastobury Experience‘ has been presented by the BBC and featured artists like Coldplay, Wolf Alice and Jorja Smith.

Next year’s Elish performance at the festival won’t be her first. She hit the stage in 2019 which was a great triumph with NME called it a “once-in-a-generation” and Variety “Life- Affirming” performance.

That year she have been given a bigger stage due to her popularity. “We are trying to give her a bigger stage where we can get a larger audience in there. So we are going to move her on to The Other Stage and we are just working out exactly where that’s going to be” festival organiser Emily Eavis commented at the time. Her set has been upgraded from a 10,000-capacity John Peel tent to a 40,000-capacity stage.

Last week Tuesday, Billie Eilish has been seen in London for the premiere of the new James Bond movie ‘No Time To Die‘ for which she wrote the theme song. She appeared on the red carpet with her brother Finneas at the Royal Albert Hall where the celebration took place. While she casually flashed her left hand, she revealed a new tattoo, that seem to be two fairies.

In the meantime, the singer has been confirmed to perform as Sally from Tim Burton’s ‘The Nightmare Before Christmas‘ stop-motion classic from 1993. The upcoming concert will take place in LA at Banc Of California Stadium on 29th October.

In August Billie Eilish hit the top spot in UK Album Charts and secured her second Number 1 album. Happier Than Ever album “clinched the top spot with 39,000 chat sales with 33% of the sales via streams“.

You might now be able to see Eilish at Glastonbury (22-26th June 2022) as the entries have been sold out due to rolled out tickets from this year and last year show. However, the singer starts her UK and Ireland Tour in June 2022. See full tour dates and ticket info in the recent mxdwn article.