On the fifth anniversary of David Bowie’s death a number of acts performed in a live-stream held as tribute to the artist titled ‘A Bowie Celebration: Just For One Day’. The event was set up by pianist Mark Garson and took place on 9th January, a day before the official anniversary.

Yungblud played a cover of Bowie’s 1971 song ‘Life On Mars’ in a suave performance. Sharing the video on Twitter, he commented, “It’s rare in this life that you meet someone who shaped your whole existence. I felt like I was on a different planet last night. He was there and I was with him.”

it’s rare in this life that you meet someone who shaped your whole existence. i felt like i was on a different planet last night. he was there and i was with him. it was truly one of the the greatest moments of my fookin life. thankyou for everything starman. @DavidBowieReal pic.twitter.com/GhwePF1dAg

US bands also participated in memory of the legend; Trent Reznor of Nine Inch Nails played two covers, firstly, ‘Fantastic Voyage’ and secondly ‘Fashion’. Taylor Momsen from The Pretty Reckless played ‘Quicksand’, while Corey Taylor of Slipknot and so many more shared their love for Bowie, who no doubt inspired their music creation, whether consciously or not. £2 of every ticket sale for the event was donated to Save the Children, an organisation which Bowie is said to have felt strongly about.

The full line-up can be found below. 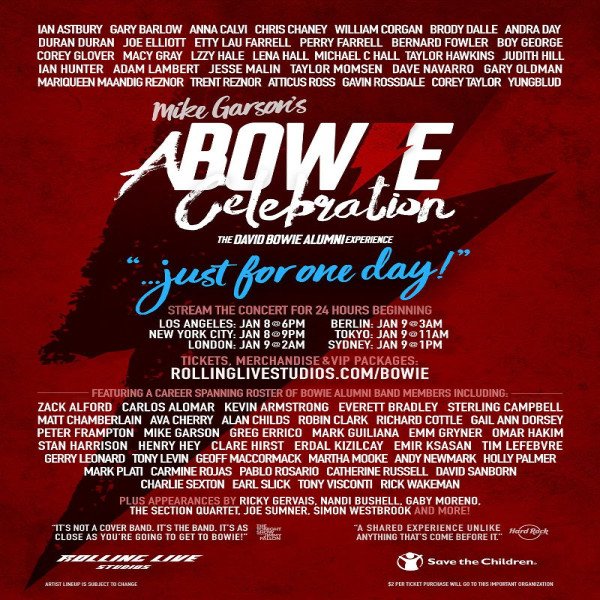 To mark the anniversary of his death and what would have been his 74th birthday, two of his covers were released on vinyl and on streaming platforms. The first song was Bowie’s cover of ‘Tryin’ To Get To Heaven’ by Bob Dylan, which was followed by John Lennon’s ‘Mother’.