Twenty One Pilots Confirm Dublin Show The Day Before Glastonbury 2020

Twenty One Pilots will be playing a show in Dublin the day before Glastonbury 2020 begins. It has sparked speculation that the duo will head over to the UK to perform at Worthy Farm, as the iconic music festival celebrates its 50th anniversary.

The Ohio duo is set to play the RDS Arena in Dublin on June 25, supported by Blackbear and Nothing But Thieves. Tickets go on sale on Friday 29 at 9 am.

Twenty One Pilots are currently in the middle of touring, supporting their fifth album, ‘Trench’. It was awarded four stars in an NME review, with the album being described as “the sound of a band ratcheting up the ambition without ever being pulled down by an undertow of pretentiousness. It’s more low-key than ‘Blurryface’, but ultimately more rewarding.”

The band, responsible for hits including ‘Ride’, ‘Heathens’ and ‘Stressed Out’, could, in theory, join a line up that presently includes Sir Paul McCartney as a headliner, and Diana Ross, who took a place in the ‘Legends Slot‘. 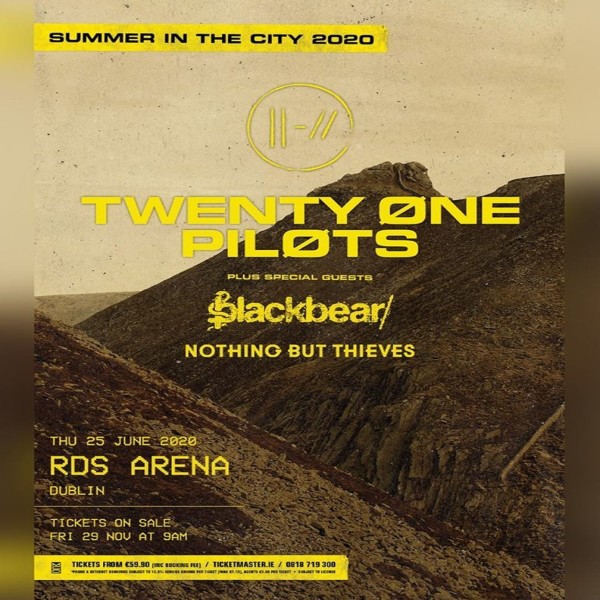 Last week, Twenty One Pilots claimed the top spot on Billboard’s Biggest Rock Albums Of The Decade for their fourth studio album, ‘Blurryface’.

‘Sigh No More’ by Mumford & Sons took second place, two albums by Imagine Dragons came within the top five, with ‘Night Visions’ and ‘Evolve’ taking third and fifth respectively, and ‘Guardians Of The Galaxy: Awesome Mix Vol. 1′  in fourth.

Fun, Lorde and The Lumineers also made the top ten.

IT’S REAL!! So excited.. Having Paul McCartney coming back to headline the Pyramid next year is an absolute dream come true. There really was no one that we wanted more for the 50th anniversary @ Glastonbury Festival https://t.co/soNWgJqoLU

Hey Glasto – excited to be part of your Anniversary celebrations. See ya next summer! https://t.co/31yA40Eb4d

Twenty One Pilots are booked to appear at Mad Cool Festival 2020 in Madrid. Other major acts in the line up include Taylor Swift, Tove Lo, Pixies, Alt-J and Billie Eilish. Tickets go on sale on December 1.