The Wombats Release New Single ‘If You Ever Leave, I’m Coming With You’ and Announce World Tour 2022

TikTok sensation “Greek Tragedy” is now certified gold in the US, after a sudden bloom of internet traction on The Wombats sing-along track off of 2015’s album, Glitterbug. Being used in over 600,000 videos, some with over 1 million views, the song has been propelled forward into the top 5 of their most listened-to tracks. Showing how the songwriting and timeless power of the band can have an effect on any generation. 2018’s Beautiful People Will Ruin Your Life, saw the band crash back into the mainstream with some of their biggest hits. Four albums into their up-beat Brit-rock carrier, The Wombats prepares for new music.

Fresh off the bat from their performances at Reading and Leeds, The Wombats are set to release their new studio album, Fix Yourself, Not The World, via AWAL on January 7th. In support of their new album, the band will embark on a world tour- which will include a trip to the O2 Arena, making it their biggest UK headliner.

Our new single If You Ever Leave, I’m Coming With You, is OUT NOW. It’s taken from our upcoming album Fix Yourself, Not The World OUT JANUARY 7TH 2022. [1/3]

The Wombats has already given us the single “If You Ever Leave, I’m Coming With You”, which gives us a glimpse of the ever-improving dynamic of the Wombat’s style. Accompanying this is the track “Method to the Madness”, which helped to build up a profile of excitement for the upcoming release. Met with the challenge of recording remotely, Wombats have not been stopped in creating something forward-thinking and captivating.“It was pure madness, to be honest,” explained Matthew Murphy. Working with Jacknife Lee, Gabe Simon, Paul Meaney, and Mark Crew, to mix together one of the most anticipated records of 2022. The one with the most frantically exciting album covers to come with it too. 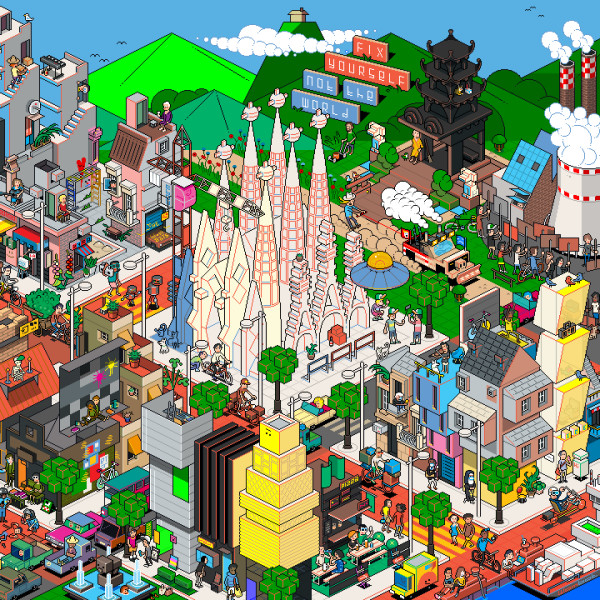 Fix Yourself, Not The World tracklist:

“The Wombats have been in the game since 2007, but perform with the verve and joy of a band just starting out…” said SPIN as they analyzed a previous show by the band. You will be able to catch The Wombats in early 2022 with their first show in Leeds. With a double stop in their hometown of Liverpool. These are big shows and are sure to be electric.

UK dates of the tour:

You can see the full list of dates here.

You can pre-order your copy here.