Sum 41 have been announced as the second headliners for Slam Dunk Festival 2020. The announcement comes as the second wave of artists, to be performing at next year’s festival, have been revealed. Tickets are on sale now and can be purchased here.

Speaking to Kerrang about the announcement, Sum 41 frontman, Deryck Whibley, said: “Slam Dunk is a festival we’ve been wanting to do for a long time, and until now we’ve never been able to pull it off.

Scheduling and all that stuff has meant we’ve not been able to play in previous years, which has been frustrating. To finally be appearing at Slam Dunk is a great feeling – it’s been a long time coming. It’s something we’ve always wanted to do, and it’s a festival I’ve continually heard great things about. Sum 41 playing Slam Dunk just makes sense to me.”

+ Punk In Drublic is returning with @NOFXband, @Pennywise & MORE! pic.twitter.com/xWFavxzoR7

The Canadian pop-punk rockers will be joined on the bill by the likes of The Used, Billy Talent, The Story So Far, Basement, Your Demise, We Are In The Crowd, NOFX, Pennywise, Dream State, and Grayscale.

NOFX’s Fat Mike, said: “I don’t actually remember playing last year… so we decided to do it again this year! I probably still won’t remember, but this time we’re gonna video tape it!”

Sum 41 will join be joined as headliners by the previously announced Don Broco, alongside the likes of The Wonder Years, State Champs, Mayday Parade, Knuckle Puck, Four Year Strong, Bayside, Ice Nine Kills, Issues, Hands Like Houses and Motion City Soundtrack. The festival’s latest line-up announcement also includes a world exclusive reunion from We Are The In Crowd and the return of Your Demise. 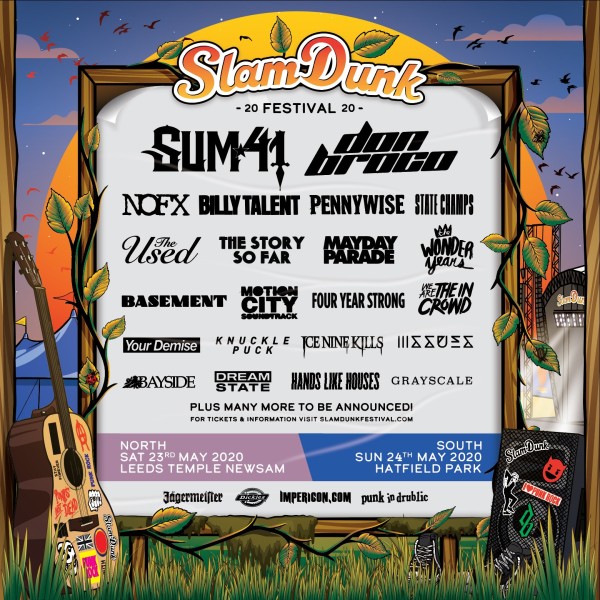 Posting on Instagram, Slam Dunk wrote: “THE SECOND #SDF20 ANNOUNCEMENT HAS ARRIVED! Yes, it’s happening, the rumours are true… We are bringing the mighty Sum 41 to the party as our second headliner, alongside Billy Talent and The Used!

“SDF favourites The Story So Far are back for 2020 and Basement make their 2nd ever SDF appearance. We have 2 massive reunions for Slam Dunk 2020. The first is the UK’s very own hardcore heroes, Your Demise. We are also super excited to have We Are The In Crowd back on UK soil as a world exclusive!”

Concluding they said: “We are pleased to announce the return of Punk In Drublic Stage to SDF. The full line up will be announced soon, but for now we can tell you NOFX will be returning with the legendary Pennywise. Last but not least we have UK up-and-comers Dream State, and American pop-punks Grayscale, plus plenty more to come over the following months, including our 2 heavy stages!”