Stormzy has canceled shows across Asia amid travel and health concerns regarding the coronavirus outbreak. As a result, the rapper will not be playing shows in Malaysia, Singapore, Japan, China, and South Korea in March. The shows were scheduled in support of his latest album, ‘Heavy Is The Head’.

Furthermore, rather frustratingly for many fans, three of the shows had already sold out. However, Stormzy does intend to reschedule the shows for later dates. At this time, it remains unclear when these dates will be.

Stormzy took to Instagram to post a statement over the cancellation. He said: “I was seriously looking forward to bringing the #HITH World tour to Asia and playing some epic sold-out shows, but due to the ongoing health and travel concerns surrounding the Coronavirus, I’m regrettably having to reschedule this leg of the tour.”

☹️ I was seriously looking forward to bringing the #HITH World tour to Asia and playing some epic sold out shows but due to the ongoing health and travel concerns surrounding the Coronavirus, I’m regrettably having to reschedule this leg of the Tour. Information regarding the rescheduled dates will follow in due course. Please contact your local ticket vendor for any further queries. I promise I’ll be back

Stormzy is however not the first artist to pull out of shows in Asia due to the coronavirus outbreak. At the end of January, the Boston Symphony Orchestra decided to postpone its 2020 Asian tour with pianist Yefim Bronfman.

Elsewhere, throughout Asia, major K-pop acts such as Taeyeon, Winner, NCT, and GOT7, and Cantopop artist Andy Lau have at one point or another, canceled shows due to the spread of the virus.

Stormzy was recently announced as a headliner for this year’s Reading and Leeds Festival. Liam Gallagher and Rage Against The Machine are also billed in headline slots. Other artists scheduled include Migos, Slowthai, Two Door Cinema Club and The Courteeners.

Elsewhere, AJ Tracey, Sam Fender, Dermot Kennedy, Idles and Mahalia are due to perform. It runs from August 28-30. Check out the flyer below for the line-up. 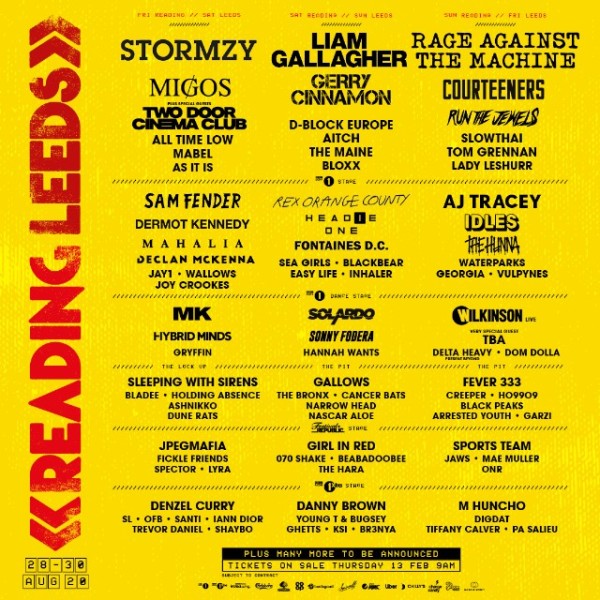 Stormzy’s second debut album, ‘Heavy Is The Head’, was released on December 13, 2019. The Guardian awarded the album four of five stars. The review reads that ‘Heavy Is The Head’ is a “grandstanding, soul-searching bid to crack the US – without losing that pugnacious south London voice”.