Stormzy has announced that he will be hitting the road in 2020, on a massive 55-date world tour entitled ‘H.I.T.H.’. The tour is set to mark one of Stormy’s biggest live offerings to-date and is one of the most highly anticipated tours of 2020 and will includes shows across Europe, Asia, Australia, New Zealand, North America, UK & Ireland, and Africa. Tickets for the hotly anticipated tour can be purchased here.

HEAVY IS THE HEAD – THE WORLD TOUR 2020 #HITH
Tickets on sale 9am your LOCAL time Friday 6th Dec 2019. Dubai on-sale Wednesday 4th 8am. For early access to tix (ex. Asia & Africa) pre-order ‘Heavy Is The Head’ from my official store by 9AM UK Time 3rd Dec https://t.co/CgwCD9hRd6 pic.twitter.com/6TRx1MGxGN

Stormzy will hit the road, in Dubai, on February 7 2020 and will conclude in Africa, on October 10 2020. The tour will include performances at The Novo, in Los Angeles, and New York’s Brooklyn Steel as well as shows in Washington DC, Philadelphia, Chicago and much more. The UK leg of the H.I.T.H world tour kicks off, in London, on September 3 2020, he will then head hit to Dublin, Glasgow, Newcastle, Leeds, Liverpool, Sheffield, Manchester, Nottingham, Birmingham, and Cardiff, before concluding in Bournemouth, on September 22 2020.

The South London rapper will make his solo debut at London’s O2 Arena for two nights in September 2020, which also marks his first solo shows, in London, since his three-day stint, at Brixton Academy,in 2017. Stormzy will then grace the stages of arenas throughout the UK and Ireland before heading to Africa, where he will tour for the first time. While in Africa he will play a notable show, in his homeland of Ghana, before bringing the world tour to an end with a show, in Lagos, Nigeria. 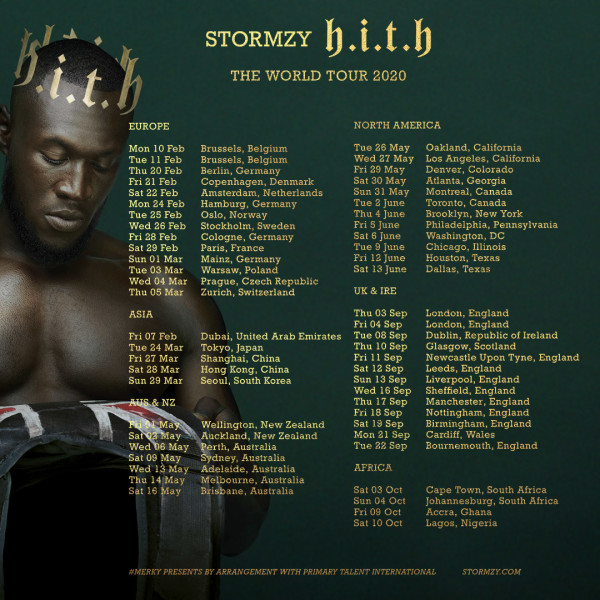 The touring announcement came on the heels of a phenomenal few weeks for 26-year-old rapper, which saw him kick-off the month by announcing his hotly anticipated album, ‘Heavy Is The Head’, which was released on December 3 2019. It also comes after the release of the musician brand new single, ‘Own It’, which features musical heavyweight’s Ed Sheeran and Burna Boy.

Stormzy’s upcoming album, ‘Heavy Is The Head’,marks a hugely exciting return for the multi award-winning grime rapper and is an album which has been executively produced, entirely by the musician himself. The album showcases his world class lyricism and musicality alongside many of his celebrated and relatable subject matters, which continue to dominate the cultural conversation.

The album also features a stellar list of additional vocals from some of the most exciting musicians of our generation – all of whom were hand-picked by Stormzy and includes Ed Sheeran, H.E.R, Burna Boy, YEBBA, Aitch, Headie One, and Tiana Major9. It also features production from Fred Gibson, Fraser T Smith, and T-Minus, among others.

To date, Stormzy has unveiled four out of the sixteen tracks, on the album, which leaves twelve unheard tracks still to come. In April he made his remarkable return to the spotlight, from a year out, where he unveiled ‘Vossi Bop’ – his first track since 2017. The track broke the record for the biggest week one streams for a British Rapper ever, with streams accumulating to over 12.7 million. The single earnt Stormzy his first ever UK number 1 single, which he held for two consecutive weeks. Shortly after, he unveiled the tracks ‘Crown’ and ‘Wiley Flow’ – which saw him pay homage to British MC Wiley.

The album announcement follows on from Stormzy being hailed as one of Time Magazine’s ten ‘Next Generation Leaders’, which coincided with him being only leader honoured with a cover for the special issue. Stormzy has been described as “[Stormzy’s] known for evolving the underground musical landscape, as well as being a perennial political agitator, Stormzy is a true spokesman of black empowerment and social activism.

“He has become one of the UK’s most inspiring cultural figures and earlier this year, during his headline performance at Glastonbury Festival, he took the opportunity to highlight a plethora of social issues, including the injustice of young black children being criminalized in a biased and disproportionate justice system.”