Standon Calling has revealed the second wave of names that will be performing at the 2019 festival, after having announced it’s first round of acts for 2019 a couple of weeks ago. Among the names at the top of the second wave of acts are, Hertfordshire locals, Friendly Fires who have joined the already star-studded line up of Standon Calling, 10 years after they headlined in 2009. The music, comedy and arts festival will take over Standon Lordship near Ware between Thursday the 25th of July and Sunday the 28th of July 2019.

Standon Calling Festival founder, Alex Trenchard, said: “It was brilliant to see such a great reaction to our first wave of artists, and we’re delighted to add even more special names and performances for Standon Calling 2019. Friendly Fires’ 2009 Standon Calling performance remains one of the most all-time memorable Standon Calling moments. They’re one of the best bands I’ve ever seen live and this St Albans band’s homecoming special guest show is going to be mind-blowing.” 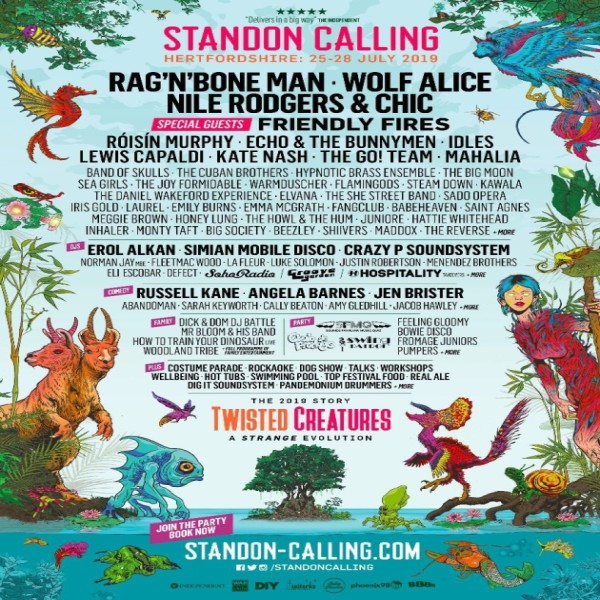 Festival director Alex Trenchard added: “With the likes of Róisín Murphy, Mahalia and Steam Down joining today – and the unmissable Sado Opera – it’s undeniably our greatest Standon Calling line-up to date, and one that has me counting down the days to July already.”

The following acts are also on the bill, and will be joining the already stellar line-up is DJ Sets from: Erol Alkan, Simian Mobile Disco, Crazy P Soundsystem, Norman Jay, Fleetmac Wood, La Fleur, Luke Solomon, Justin Robertson, Menendez Brothers,  Eli Escobar, Defect, Soho Radio, Groove Garden, Hospitality, and many more. Meanwhile, the energetic Russell Kane will be headlining the Comedy stage along with Angela Barnes and Abandoman, with children’s favourites Dick & Dom taking the reins over at Family Entertainment, with more still to be revealed.

With more acts still to be announced this summers festival is already shaping up to be an epic event that is not to be missed. Tier 4 tickets for the festival have just been released, and are available now starting at £159 for weekend camping tickets. For more info and everything else head over to the Standon Calling website.