Sliptknot’s ‘Knotfest’ Heading to the UK for First Time Ever

Slipknot have announced that they are bringing their ‘Knotfest’ festival to the UK, for the first time ever, in 2020. The first ‘Knotfest’ will be taking place, in Milton Keynes, at The National Bowl, on 22 August 2020.

Meanwhile, the line-up is being kept tightly under wraps, until next year, at least. Unfortunately, that is all that is known of the festival, the only thing we can be assured of is that their will be a headline performance by Slipknot themselves – which will mark the first time the band perform at the iconic venue since their last performance at Ozzfest, in 2001.

Members of Slipknot’s official fan club, Outside The 9, will have a first access to the pre-sale, which will go live, on 19 December, at 10am GMT. For those not yet a member you can join and get your passcode here.

The announcement comes ahead of Slipknot hitting the road, in Europe and the UK & Ireland, for a headline arena tour, in January 2020. The band will kickstart the UK & Ireland leg of their tour off, in Dublin, at 3Arena, on 14 January 2020, before heading to Manchester, Newcastle, Glasgow, Sheffield, Nottingham, Cardiff, Birmingham, and finally concluding in London, at The O2, on 25 January 2020. Tickets for Slipknot’s European tour are on sale now and can be purchased here.

Slipknot returned, this August, to the top of the ‘Billboard Top 200’ with the debut of their new album,’WE ARE NOT YOUR KIND’, and it also marks the Grammy Award-winning band’s third consecutive number 1 album, on that chart. The album also made an impact worldwide with number 1 debuts in the United States, United Kingdom, Mexico, Australia, Canada, Japan, Russia, Ireland, Belgium, Portugal and Finland, as well as Top 5 debuts in Germany, France, Norway, Italy, Austria, Sweden, Switzerland, The Netherlands, Poland, Spain and New Zealand. 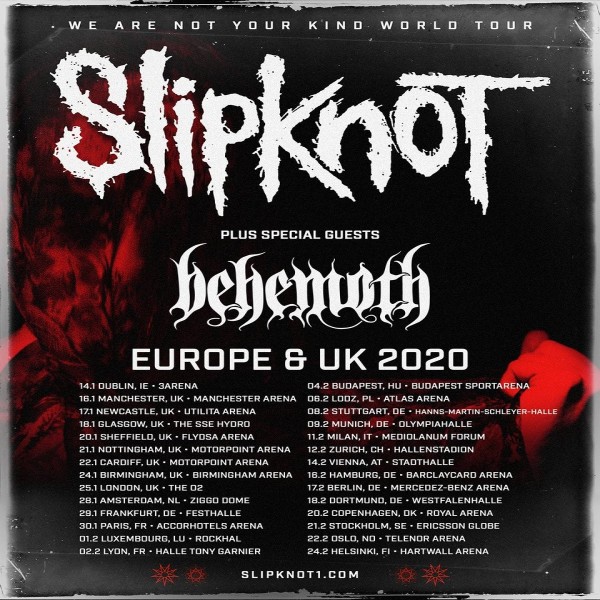 ‘WE ARE NOT YOUR KIND’ is highlighted by the current single ‘Nero Forte’, ‘Solway Firth’, and the album’s first single ‘Unsainted’. The band’s latter two singles, ‘Solway Firth’ and ‘Unsainted’, have come with an M. Shawn Crahan directed music video, and each has trended worldwide on YouTube, with ‘Unsainted’ coming in at number 1 worldwide for a full 24 hours. Meanwhile, combined, videos for the new album have amassed over 87.2 million views, in only three months.