Reading and Leeds Festival have added more than 70 additional names to this year’s already stellar line-up. Joining headliners Foo Fighters, Post Malone, Twenty One Pilots, The 1975, will be Dave, Anteros, and Machine Gun Kelly among others. The first wave of acts for the this year’s bill were revealed by Greg James on his BBC Radio 1 breakfast show. The festival will take place between the 23rd and 25th of August 2019, at Richfield Avenue, in Reading and, at Bramham Park, in Leeds. Tickets are available now, and can be purchased here.

This year’s Reading and Leeds Festival includes a stellar line-up, which is lead by four crowd-pleasing favourites including Foo Fighters, Post Malone, Twenty One Pilots, and The 1975, who will spread their time between both venues across the three days of the festival. Among the 70 names announced today (March 07) and joining the trio of headliners will be AE MAK, Aitch, Anteros, Anti Up, Bad Child, Bakar, Basement, Belako, Black Honey, Blade Brown, Blood Youth, Boston, Manor, Brunswick, Cemetery Sun, Clairo, and Counterfeit. 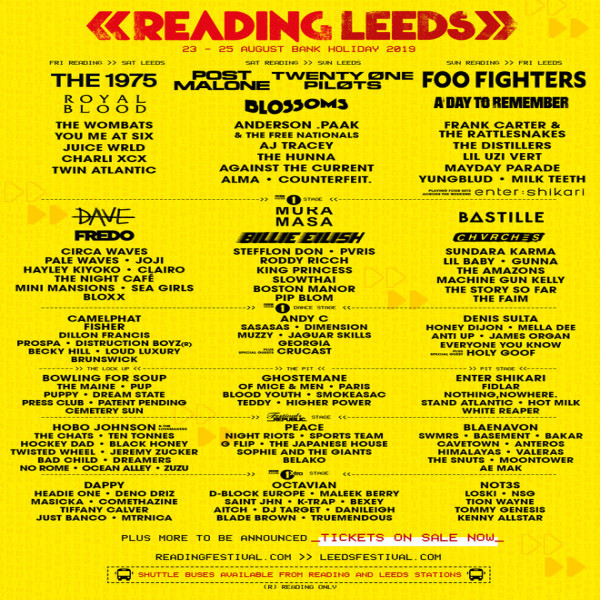 During the first wave of announcements it was revealed that The 1975 will headline, the festivals opening night, on Friday the 23rd of August 2019. The band will be joined by the likes of Juice WRLD, Pale Waves, Camelphat, Hayley Kiyoko, and Bowling For Soup. Meanwhile, Post Malone and Twenty One Pilots are scheduled to co-headline, slots, on Saturday the 24th of August 2019.

Among the other names, announced to be playing on Saturday are Blossoms, Billie Eilish, Stefflon Don, PVRIS, Crucast, and G Flip. The closing night will see the Foo Fighters bring it home, on Sunday the 25th of August 2019. The following acts are also on the bill, and will be joining the already stellar line-up is Bastille, The Distillers, NOT3S, Sundara Karma, Denis Sulta, The Amazons, and Yungblud.

The announcement comes after last years line-up was dismissed by fans as “incredibly underwhelming” and the “worst ever”, while some fans named it one of the most diverse and divisive in Reading & Leeds history. Speaking about the festival, festival boss, Melvin Benn, said: “The key thing about any festival is that you don’t stand still. I’m very clear on that. You can’t keep drumming up the same acts and expect people to continue to come and see them. Festivals have to be a reflection of what the public are listening to.”