Russian punk group Pussy Riot have claimed responsibility for the four people who ran onto the pitch, during the World Cup final between France and Croatia in their native Moscow. France eventually won the match 4-2, but during the early exchanges of the second half, there were four intruders on the pitch, one of whom even took the time to high-five France star Kylian Mbappe. The invasion was caught on camera, although current FIFA policy is to cut away from such incidents when covering these televised events.  Pussy Riot have now confirmed to be in collusion with them, via their official Twitter page. 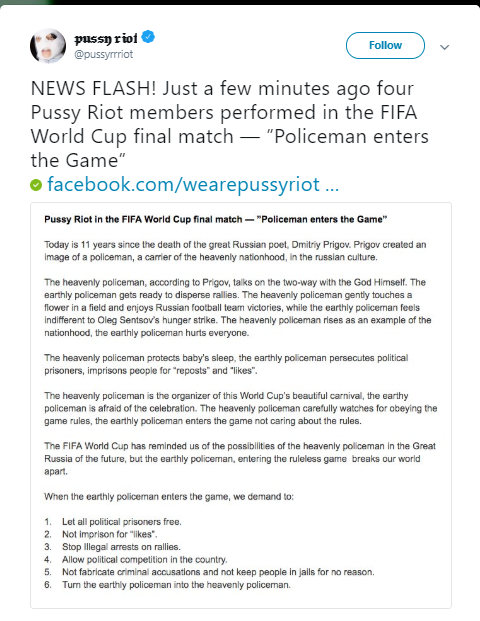 The tweet includes a statement explaining their actions, writing “Today is 11 years since the death of the great Russian poet, Dmitriy Prigov. Prigov created an image of a policeman, a carrier of the heavenly nationhood, in the russian culture,” it reads. 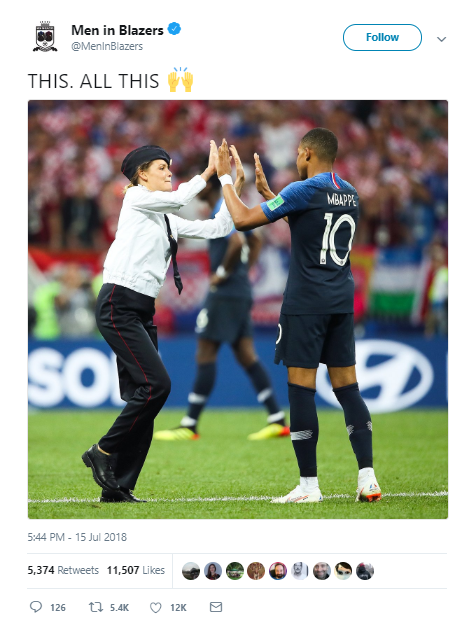 Oleg Sentsov was a vocal protester of Russia annexing of Crimea from Ukraine in 2014, and was sentenced to 20 years in prison in 2015, for charges of conspiring to commit terrorist acts, which Sentsov denies, and has been on hunger strike since mid-May 2018.

Pussy Riot have long been speaking out against Russia’s leader Vladimir Putin, for their outdoor performances and vocal criticism of the Russian president. This led to two members being imprisoned for nearly two years. Pussy Riot last released music in mid-March, releasing the track ‘E L E C T I O N S’, on the day of the Russian elections, no less.