Tool frontman Maynard James Keenan has gifted their patient fans some good news today, with an update on the progress of the band’s long-anticipated new album. The group haven’t released a project in over ten years, which came in the form of 2006’s monstrous 10,000 Days.

The new album had initially been slated for a release in 2017, but faced severe delays. however Keenan has tweeted some detailed info on the new record’s recording process, revealing that guitarist Adam Jones (referred to in the tweet as AJ) was ‘deep’ into recording his guitars for the project.

Keenan’s tweet did seem cautious in regard to the album’s overall progress, but the tweet seemed to confirm that we can at last expect the project next year. This follows a previous update from the singer in February, suggesting that his “words & melodies” for the album were “100% done on all but 1″ of the album’s tracks.

Keenan has previously blamed the slow progress of the album on his bandmates’ indecisiveness. “I like to release records and write things a little more quickly than those guys like to write,” he said. “Their process is very analytical.” Keenan released new music with his other band A Perfect Circle earlier this year, titled Eat The Elephant, which garnered high praise among many.

In December 2017, Rage Against the Machine, Prophets of Rage, and former-Audioslave guitarist Tom Morello revealed that he had heard new music from the band. He shared an image of himself and the band on his Instagram page, writing “”Had the honour of being the first outsider to hear new #TOOL music today!!” describing what he had heard as “epic, majestic, symphonic, brutal, beautiful, tribal, mysterious, deep, sexy and VERY Tool.” 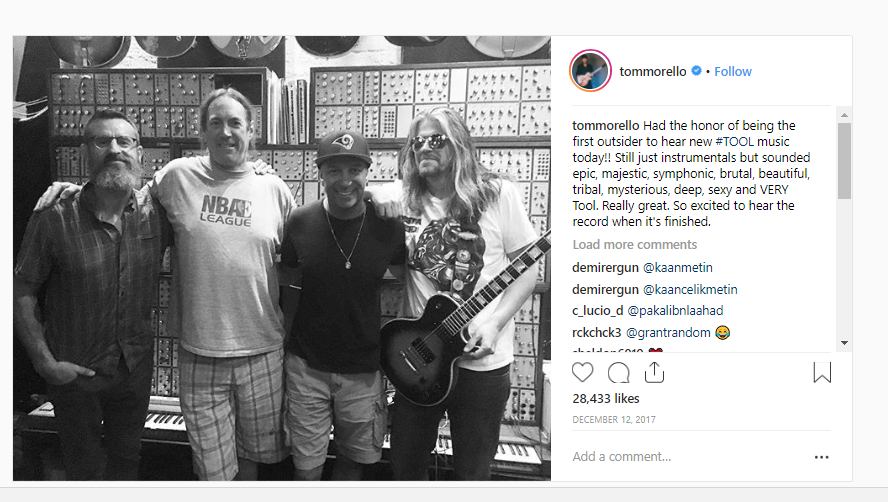