Aussie psych rock band King Gizzard And The Lizard Wizard late last night announced that their first four studio albums and debut EP will be reissued on 12″ vinyl. They are set for release on November 2nd via their in-house label Flightless Records, run by drummer/manager Eric Moore.

All five records will be released with ‘re-imagined artwork, packaging, liner notes and wax colours’ and each will also have a corresponding ‘special edition’ limited to 5,000 copies worldwide. Pre-order sales will open on September 14th at 9am AEST on Flightless.

Their debut Willoughby’s Beach EP will have the ‘Ocean Death 12″ Edition’, the muddy-garage 12 Bar Bruise a ‘Muckraker Edition’, wild-west concept album Eyes Like The Sky a special ‘Gun Smoke Edition’, the sitar-adorned Float Along – Fill Your Lungs a ‘Kale And Banana Smoothie Edition’ and the weirdo-comp Oddments a ‘Hot Wax Edition’. 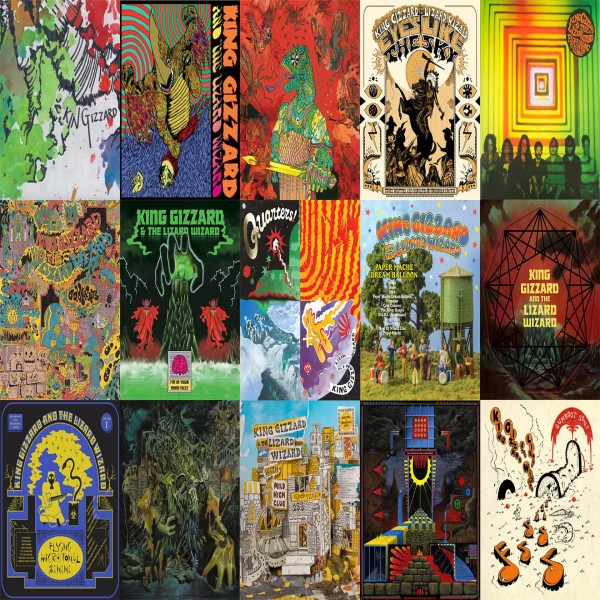 Prior to the announcement, there were widespread calls amongst the band’s committed fanbase for new reissues, with many of the albums out of print for years and fetching hefty prices on the secondary market. The new reissues will be the band’s first releases since last year’s Gumboot Soup album, an interesting and eclectic collection of modal jazz, stoner rock and classic ’60s psych.

Released in the nick of time on New Year’s Eve, the album was the band’s fifth of that year alone: alongside Gumboot Soup, they made Flying Microtonal Banana (a Turkish-tinged experiment in microtonal tuning), Sketches of Brunswick East (a psych-jazz collaboration with Mild High Club), Murder of The Universe (a doom-rock, HP Lovecraft-influenced concept album) and Polygondwanaland (a Yes-inspired outing into progressive rock).

The prolific Aussie band have taken some well-earned time away from the studio this year, with most of 2018 spent touring worldwide in support of their albums.