The former Smiths member is to launch his new album this October based on the ‘atmosphere of the city’. 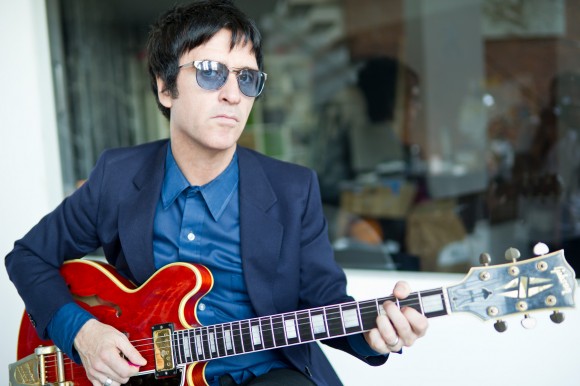 Having released his debut solo album in February 2013, Johnny Marr has announced that his second album entitled ‘Playland’ will be launched in October of this year having been inspired by ‘Homo Ludens’ the influential book written by Dutch historian and cultural theorist Johan Huizinga which translates as ‘Man the Player’ or ‘Playing Man’.

Alongside Doviak, and mixed in New York, ‘Playland’ was remastered in London’s famous Abbey Road by Frank Arkwright who has worked previously with Arcade Fire, New Order, Joy Division, Coldplay, Oasis as well as Marr’s old band The Smiths.
After the disbandment of the Smiths, Marr went on to share a microphone with the legendary Paul McCartney, became a brief member of The Pretenders and The The, then on to forming Electronic with New Order’s Bernard Sumner which produced three albums from 1991 to 1999 with a greatest hits album released in 2006.

Alongside Electronic Marr had become somewhat of a session artist, using his Smiths fame to gain notoriety and collaborating work amongst several bands and artists including Billy Brag, The Pet Shop Boys and Talking Heads which led onto other musical projects and collaborations such as ‘Modest Mouse (2006-2009), 7 Worlds Collide (2001-2009) and more recently having shared his skills and talents with a Wakefield indie group known as The Cribs.

“The album’s main themes are the atmosphere of the city, and the preoccupations of the people who live in them; those preoccupations being consumerism, sex and anxiety, or distraction and transcendence from those things,” says Marr. Having been raised in the Catholic school system Marr expresses that he always felt a need to “find some escape” to break out of a life surrounded by people he didn’t want to be around.

Therefore ‘Playdays’ has an autobiographical feel to it with track five ’25 Hours’ expressing his entrapment as a child and his burning desire to do anything to escape it. Marr also expresses many human affiliations such as “a love affair with a building” when describing the third track on the album ‘Dynamo’ inspired by his ongoing interest in psychogeography.
The news of ‘Playdays’ release arrived in conjunction with his October tour which will see him travel the country from Lincoln, Bexhill, Bournemouth to Glasgow and Leeds.

See below for tour dates: