Glastonbury’s line-up has just got even bigger, with the line-up for The Common Stage being revealed. Among the names revealed to be performing across the Temple, Rumshack, and Samula stages at The Common – which transport festival goers “to an ancient civilisation for a tribal celebration”, are Hot Chip, The Streets’ Mike Skinner, and Bellatrix. This year’s, five-day festival will be returning, for the first time since 2017 after a traditional fallow year, to Worthy Farm, in Somerset, between the 26th and the 30th of June 2019.

The latest announcement comes just days after the line-up for the Field Of Avalon and the Silver Hayes areas were revealed. Joining Hot Chip and Mike Skinner will be Eats Everything, and Seth Troxler.

Prepare to be transported to an ancient civilisation for a tribal celebration – @GlastoTheCommon‘s first #Glastonbury2019 line-up release is here! https://t.co/SQkXbFHHmZ pic.twitter.com/HDrozdikGT

The announcement comes after Glastonbury announced this year’s headliners, which include Stormzy, The Killers, and The Cure. With Stormzy taking top billing on the Pyramid Stage on Friday night, while The Killers and The Cure will follow with respective performances on the Saturday and Sunday night of the festival. Among other notable names confirmed to be performing at this year’s festival are Miley Cyrus, George Ezra, Janet Jackson, Liam Gallagher, and Tame Impala. 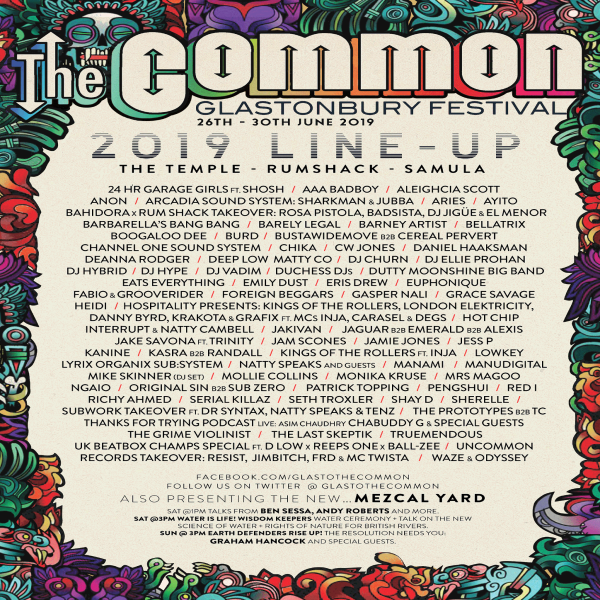 The reveal of The Common stage line-up comes after festival organiser Emily Eavis confirmed that Billie Eilish’s slot would be upgraded. Speaking, to BBC 2’s Jo Whiley, about the running order for this year’s festival, Eavis, said: “We haven’t announced what days people are going to be doing, but I can tell you that Miley is going into Kylie [Minogue], and Kylie is on Sunday afternoon. We’ve got a busy afternoon on Sunday. We’ve got Years & Years too, on the Pyramid that is.”

Continuing she said: “We’re releasing the line-ups slowly over the next couple of weeks. Be prepared for one stage at a time. We have so many acts here that it’s quite hard to do it in one go, really. We leak it out and like to give every stage their moment in the sun.”