With the springtime slowly but surely creeping back into existence, that can only mean one thing; a massive influx of festival announcements and conversations about where in the world we’re going to be headed this summer. Suffolk’s own Latitude 2022 have now put forward their offering for the Henham Park Show. With headline slots from math-gone-party rock band Foals, Snow Patrol’s first Latitude appearance in 16 years, and singer-songwriter sensation Lewis Capaldi; the festival will run from July 21st – 24th 2022. See here for further information regarding the specifics of the weekend.

We’ve got an unforgettable weekend planned for you at Henham
Park! Full details here (https://t.co/NKGTzCYnvQ)#cinchxlatitude pic.twitter.com/K6o0rT6R99

So far, the organizers have not revealed any information on the days each artist will perform, but I imagine all of the relevant information will come as we near the on-sale date. To get on top of all of the relevant information you can sign up here. Until then, however, we have been given the stage splits. Alongside our headliners, the Obelisk Arena (which I will refer to as the main stage) will also see the likes of American breakthrough singer-songwriter Maggie Rogers, mercury prize nominee Little Simz, and Rina Sawayama whose recent collaboration with Charli XCX took fans by storm. The main stage will also see the likes of a few more… let’s say old-school bands, with Manic Street Preachers, Modest Mouse, and Shed Seven all making appearances. It’d be unreasonable to put Lewis Capaldi on a lineup and not include James Arthur, just as any festival of this calibre needs a hit-filled set of bangers from someone like Example. 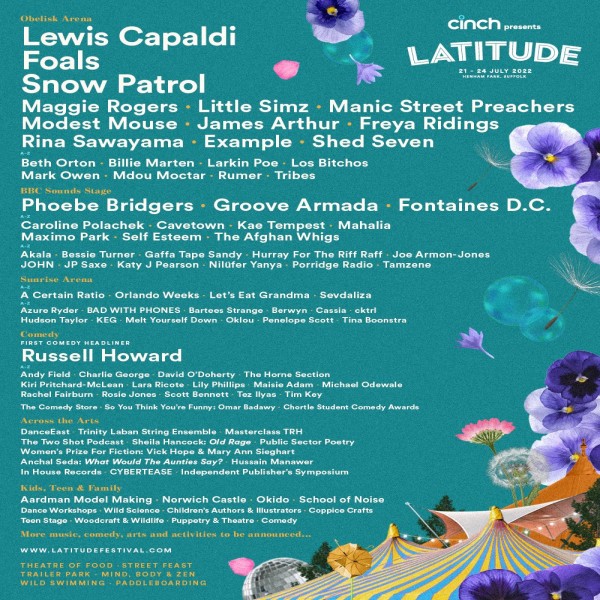 Next, we see the BBC Sounds Stage and its slightly different approach to selecting the tunes. With headlining slots by the one and only Phoebe Bridgers, dance-duo Groove Armada bring their mesmerizing energy to the tent, and Fontaines D.C. will be taking their new record Skinty Fia for a spin soon after its April release date. Appearances from Kae Tempest, Cavetown, Maximo Park, Porridge Radio, and a significant chunk of others should provide for most people with even a mild interest in music.

The Sunrise Arena will feature the likes of Let’s Eat Grandma, cktrl, and KEG to possibly introduce you to your favourite new band of the year, the Comedy tent is proud to announce its first headliner as Russel Howard; with additional appearances from The Horne Section, Rosy Jones, and David O’Doherty to name a few. And, according to the festival itself, “It wouldn’t be Latitude without an eclectic range of names from the worlds of dance, poetry, podcasts and more.”  So expect a whole host of other talks, events, meetings, and activities over the course of the weekend.