Ed Sheeran and Justin Bieber have teamed up, for the first time since 2015, on new song ‘I Don’t Care’. The single dropped earlier this morning (May 10) and is the second time the duo have collaborated, the last time being in 2015 with, ‘Love Yourself’, from Bieber’s album ‘Purpose’. You can listen to the song here:

The release comes after news of a new collaborative single dropped, at the start of the week with both Sheeran and Bieber taking to social media to announce the news. Revealing the news, of the upcoming release of new collaborative single ‘I Don’t Care’, which has been produced by Max Martin, Shellback and FRED, on social media, Sheeran wrote: “Me and Justin Bieber have got a new song out. It’s called ‘I Don’t Care’, I hope you like it.”

The release of the new single, ‘I Don’t Care’ comes after Bieber teased the release of the track on his Instagram story, sharing a brief clip of the song from his computer after confirming the song’s imminent arrival, earlier this week (May 7). Bieber also posted images of himself and, ‘Shape Of You’ singer, Sheeran standing in front of a green screen backdrop.

Bieber released his last album, ‘Purpose’, back in 2015, with Scoot Braun teasing, in January, that its follow-up – and the pop star’s fifth album – would arrive in 2019. The release of the collaborative single, ‘I Don’t Care’, comes after Bieber announced he was taking a break to “repair some deep rooted issues”, last month. However, Bieber surprised fans recently by taking to the stage with Ariana Grande at Coachella 2019.

Meanwhile, Ed Sheeran – who released his last album ‘÷’, in 2017 –  has also been in the studio with Tokyo band, One OK Rock, with the band describing their time in the studio as “amazing”. Sheeran’s 2019 world tour is set to hit Europe next month, eventually ending in August with six outdoor UK dates, which includes shows in Leed’s Roundhay Park and Ipswich’s Chantry Park. 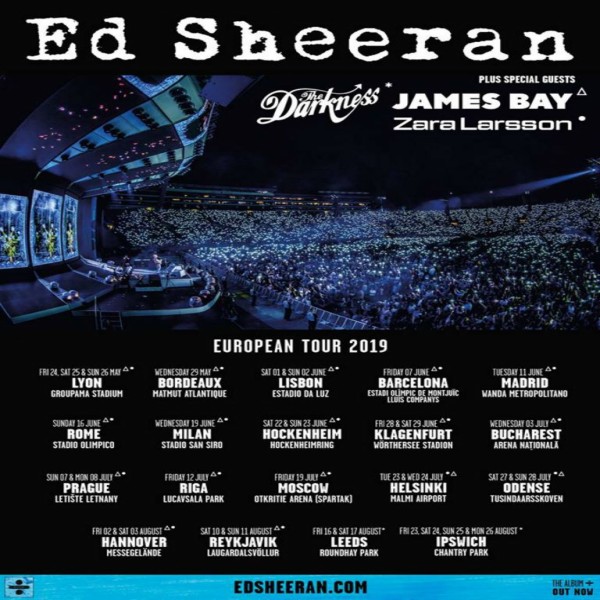