After a busy summer on their “Bloodmoon” headline tour – which only recently ended with a performance at the French festival, Hellfest – American Hardcore and Mathrock legends Converge, have announced yet another tour for the UK and EU set to begin in November. With extra support coming from American Grindcore band Full Of Hell, and Hardcore duo Petbrick, the tour will take place from November 5th – 13th, you can look into full information here. 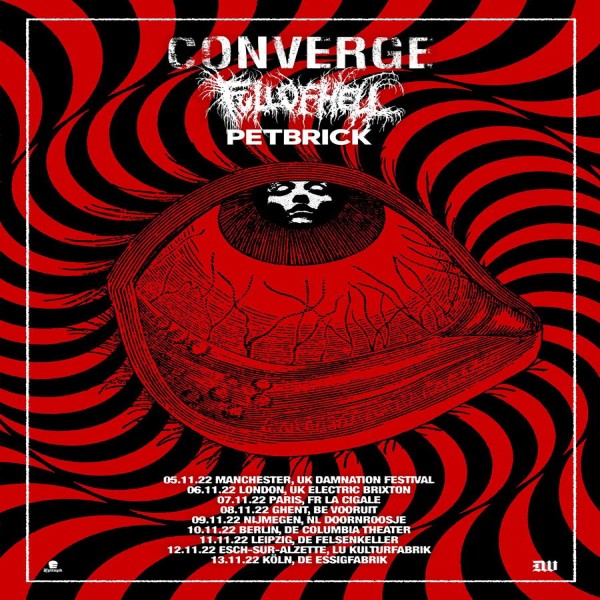 Converge is continuing its hot streak towards the end of the summer, with a support slot for the one and only Meshuggah. The tour is set to take place from September, 16th – 30th, alongside Inn Flames and Torche. You can try and snap up any remaining tickets for the Winter shows here. Converge and Meshuggah were set to go on tour together last December. Still, the tour was postponed after one of Meshuggah’s members was announced to be “undergoing medical treatment related to a skin condition on his hands”. Converge then had to pull out of the rescheduled dates due to a conflict with their own tour dates.

The clash in question was Converge’s split headline tour with Chelsea Wolfe performing their most recent effort Bloodmoon: 1. Converge members and long-term musical partners (American singer and musician Chelsea Wolfe and her collaborator Ben Chisholm with former Converge member and Cave In vocalist Stephen Brodsky) played as a seven-piece and performed a set full of revised Converge songs.

Tickets for @petbrick1‘s tour with @Convergecult and Full Of Hell are on sale now! pic.twitter.com/pkXGdHEDco

Converge have been churning out music pretty consistently since the mid 90’s. After their debut, Halo in a Haystack, was met with only lukewarm reception; they quickly turned to reinventing their sound to one that very quickly melded the group’s signature blend of Mathcore and Hardcore. In 2001 they released their now seminal classic, Jane Doe, an album that is an essential listen to any hardcore music fans. Even Bloodmoon: 1 received pretty good levels of praise last year, considering the lifespan of the group that’s something that not many bands can boast. “We wanted to do something grander than the typical four-piece Converge music,” frontman Jacob Bannon said in a press release. “Our dynamics are pushing and pulling in all different directions on this record, and I find that to be creatively rewarding.”

See below, the full list of UK dates on Converge’s upcoming tour: