UK Drum and Bass supremos Chase And Status have today been revealed as the headliners for a newly announced X-Bass Pit Stage at Serbian Mega-fest EXIT Festival. The stage has been curated by UKF and will be headlined with Chase And Status’s “RTRN II Jungle” set to celebrate UKF and the electronic tribe’s 10 year working anniversary.

Chase & Status with exclusive RTRN II JUNGLE set!
The one and only Dub Fx!
Completely new X-Bass Pit stage with more than 20 acts! 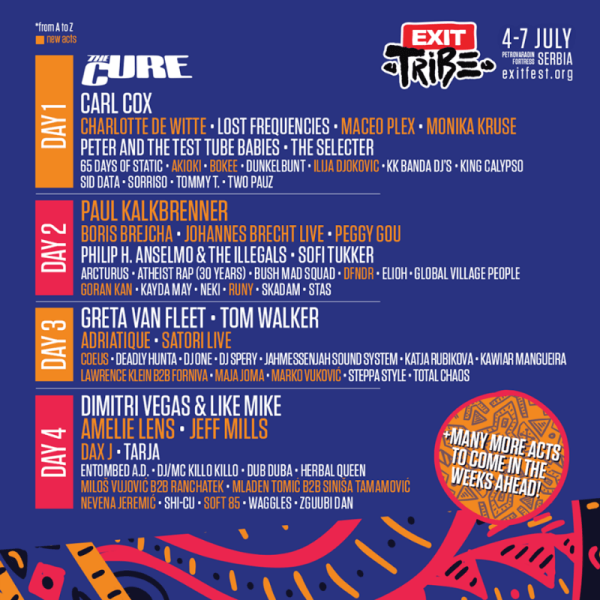 In a press release the festival revealed it’s pride and excitement in welcoming Chase and Status to Serbia saying “They are bringing their new show RTRN II JUNGLE to EXIT’s Main Stage, featuring Kabaka Pyramid and Brockie & Det. The show is named after their long-awaited new album, set for release at the end of May, marking another jubilee – fifteen years since the band began releasing music and touring worldwide”

“Their show at EXIT will also pay tribute to the late frontman of The Prodigy, Keith Flint, and the great impact he and the band made in Serbia and throughout the Balkans! Pharrell Williams of N*E*R*D once hailed Chase & Status as “The most exciting producers in the UK”, while Rihanna considers them “the backbone” of her record “Rated R”. Jay Z, Snoop Dogg, as well as Andy C and Pendulum all consider themselves fans”.

EXIT festival has always had a proud history for electronic and dance music and this year sees the festival launch its completely new X-Bass Pit stage with over 20 acts. On Twitter the festival has been reminiscing over the previous editions incredible performances and sets.

Let’s have a run through some of the finest electronic moments of #ExitFestival history!
Top 10 music sets of our beloved mts @ExitDanceArena selected by DJ Mag!

The festival takes place between the 4th and 7th of July. Ticket information available online states “EXIT tickets are available at exitfest.org, and for those who wish to bundle them with accommodation and local transfer, there are also packages starting at €145. Default accommodation is the festival camp located on the city beach, while hotels can be booked through EXIT’s official tourist agency at exittrip.org.”