The second wave of acts for the Boardmasters 2020 Festival has been announced. Blossoms, Hot Chip and Easy Life are among those billed for the Cornwall festival. So, Blossoms will be performing on Friday, (August 7), taking to the show’s main stage. Easy Life will be playing on the same day.

Meanwhile, Hot Chip will headline the Point Stage with a special DJ set on August 8. However, these are not the only new names to an otherwise busy list. Other acts include AKA Juan, The Good Old Fashioned Lover Boys, and The Menendez Brothers.

There’s also Designate & Apostle, Crawford, Olivia Dean, ONO and Redlight. Tickets are available here. For the full line up as of today, check out the flyer below. 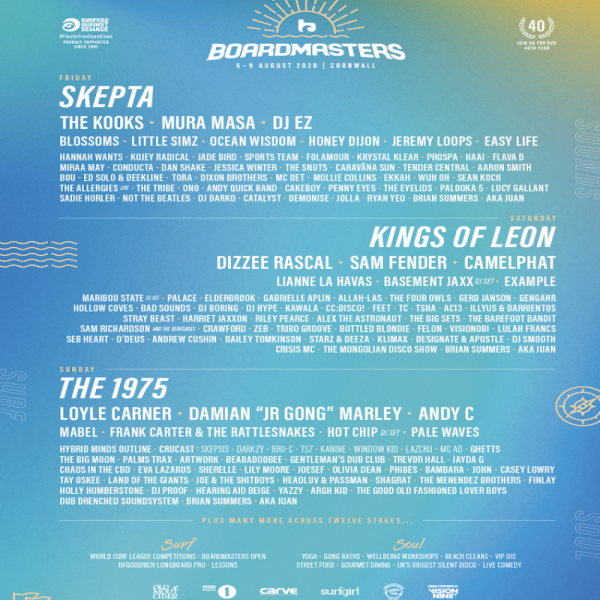 On February 5, Boardmasters announced the first wave of acts for 2020. The 1975, Skepta and American rock band Kings Of Leon were announced as headliners. The festival runs from August 5-9 at Fistral Beach and Watergate Bay in Newquay, Cornwall.

Skepta will headline on Friday, with Kings of Leon on the day after, and The 1975 closing the festival, which this year marks its 40th anniversary.

Boardmasters 2019 was canceled due to severe weather, with a yellow weather warning issued by the Met Office.

Boardmasters said in response to the cancellation: “The safety of you, the fans and attendees, as well as performers and crew comes first, and the potential risk is too severe for the event to go ahead at this time.”

They added: “We sincerely regret the disappointment to fans, and apologise for any disruption caused to local businesses, performers and crew who were looking forward to Boardmasters as much as we were”.