All Points East Announce Gorillaz, Disclosure, The National and More For 2022 Lineup

East London’s reasonably new All Points East has only been running since 2018. But since then, the festival has organised an eclectic range of pretty great music, inviting artists such as LCD Soundsystem, The xx, The Strokes, Bon Iver, Run The Jewels as well as many others over the festival so far. This year the standard has been maintained with highlights from Nick Cave and the Bad Seeds, Tame Impala, and returning after their slot in 2020 was cancelled due to COVID-19; Kraftwerk, all heading down to the Victoria Park festival.

Your first wave of artists for All Points East 2022 has arrived. Which day are you most excited about?

Purchased Early Birds? You can now redeem for the show of your choice – check your inbox for details.@AmexUK Cardmembers can book now: https://t.co/vkTxO74nLA pic.twitter.com/7LVqVtzGur

At the moment, we aren’t sure how much more is to be announced for the festival, but as it stands; Day 1 on Friday 19th August starts the festival off strong with IDLES returning for the second time in support of their new album “CRAWLER”, Pusha T joins with his only known UK appearance, and Yves Tumour and it’s Band, before Damon Albarn’s virtual band Gorillaz round out the evening. 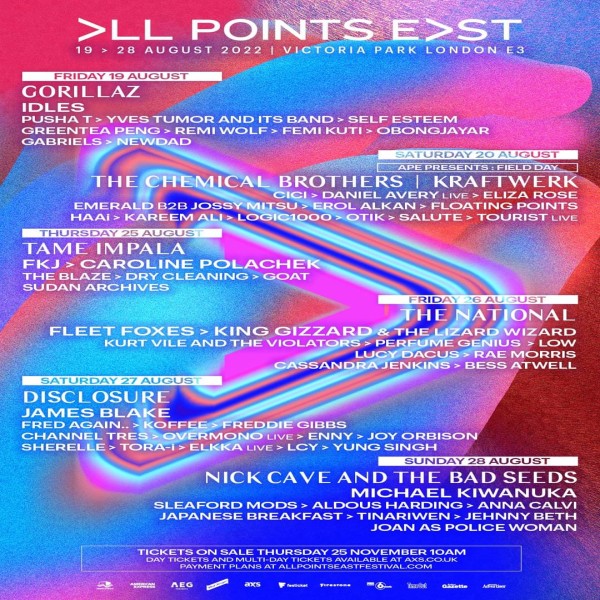 Saturday 20th will present Field Day, for the second time, since the festivals merged last year. Kraftwerk will return after their 2020 show was cancelled; they will headline the festival alongside The Chemical Brothers. Floating Points represents Manchester’s dance scene while Logic1000 keeps the party local.

Thursday 25th will be headlined by Tame Impala. Other highlights come from London’s own post-punk outfit Dry Cleaning after the success of their recent debut album, the experimental Swedish group Goat only add the energy.

Friday 26th will feature previous headliners The National, their second time on the top of the bill since the festival’s debut. They will be joined by, arguably, Melbourne’s greatest musical export King Gizzard and the Lizard Wizard, alongside the likes of Fleet Foxes, Low, and Perfume Genius.

Saturday 27th sees the festival kick back into party mode with Disclosure closing an exciting evening with support from James Blake touring his most recent critically acclaimed album “Friends That Break your Heart”, as well as the always on-point Freddie Gibbs, Channel Tres, and Sherelle.

Sunday 28th welcomes Nick Cave and the Bad Seeds back to close the final night of the festival. Nick Cave will be joined by 2020 Mercury Prize winner Michael Kiwanuka. Nottingham punks Sleaford Mods will also be attending the festival, contrasting the sweet sounds of Japanese Breakfast earlier in the day.

Tickets for the festival go on sale at 10 AM on Thursday 25th November, ticket prices may vary anywhere from £60-£100 depending on which day, and what tier of ticket you’re after. See the full lineup here, and get tickets here.